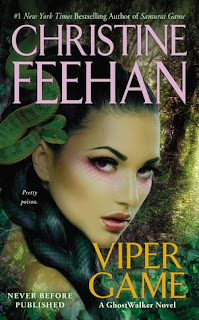 GhostWalker Wyatt Fontenot knows the price he paid for the secret military experiments that gave him his special catlike abilities. After all, he left his bayou home a healer and came back a killer. While Wyatt and his GhostWalker brother Gator may have known exactly the sort of game they were getting into, Wyatt never anticipated where it would lead—or to whom.

The swamps hold many mysteries, but few are as sinuously seductive as Le Poivre de Cayenne. The woman the locals call Pepper is every bit as enigmatic as the three little girls she’s desperately trying to protect. From what, Wyatt is soon to discover. Right now Pepper needs a man like Wyatt. Passionately. But her secrets are about to take them both deeper into the bayou than either imagined—where desire is the deadliest poison of all.


Christine Feehan's GhostWalkers is one of my favorite romantic suspense/paranormal series so I was really excited when I saw this book, only to become concerned when I saw the mixed reviews. And, in truth, I can see where everyone is coming from, even those I don't see eye-to-eye with.

It's true the stories are changing from the way they were in the beginning, but they're changing in ways I would expect them to, given Dr. Peter Whitney's diabolical plan and desperation to create the perfect soldiers. The experiments are more and more extreme, and more and more heartbreaking. The truth is, I found Viper Game to be more exciting, more captivating, and more intriguing than the last several books in the series. Yes, Wyatt was often a jerk, but considering Pepper's "enhancements" and her inability to control them, it's a wonder to me that Wyatt allowed any of the men on his team to live beyond the first few chapters!!

Bottom line - run, don't walk, to whatever store you purchase your books at and pick up this book. You won't regret it!!