Gnosticism: From Nag Hammadi to the Gospel of Judas Narrated by David Brakke 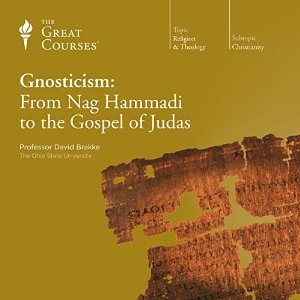 I’m always intrigued by the origins of things; language, cultures, traditions... which is why I love listening to The Great Courses’ historical (especially ancient histories) lectures. Though I struggled through the first 20% or so of this lecture because it wasn’t at all what I expected, it was still fascinating and eye-opening, to say the least.

Gnosticism: From Nag Hammadi to the Gospel of Judas is ‘narrated by Professor David Brakke who did a fabulous job explaining the differences and divisions, no matter how intricate, between the many early ‘religions’ and how they related to, or differed from, Christianity.


This course takes on these provocative questions and more, in a narrative that unfolds as an enthralling religious detective story—penetrating the mysteries of a stigmatized yet profoundly important legacy of religious thought. Among many intriguing features of the story, you’ll learn that:

• What we call “Gnosticism” comprises a number of related religious ideologies and movements, all of which sought “gnosis,” or immediate, direct, and intimate knowledge of God;

• Gnostic thought and practice reveal to us the precursors of the mystical tradition within Christianity.

Many of the teachings of the early churches read like Greek or Roman mythology, which was, as I said, not at all what I had expected. Once I wrapped my head around what I was listening to, I simply couldn’t turn it off.

I highly recommend this 12ish hour lecture to anyone interested, as I am, in the ancient origins of theologies.

For more information check out The Great Courses: From Nag Hammadi to the Gospel of Judas
Posted by Blithely Bookish at 12:30 AM