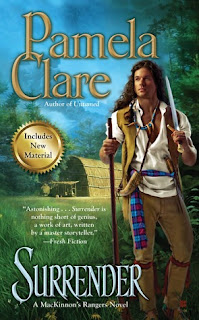 A hand-picked cadre of warriors, they had the fierce courage of their Scots forefathers, combined with the stealth and cunning of the Indians who lived beside them in the wilderness. Battling the French in a no-holds-barred combat, they forged a new brand of honor, became a new breed of men...MacKinnon's Rangers

Iain MacKinnon had been forced to serve the British crown, but compassion urged him to save the lovely lass facing certain death at the hands of the Abenaki. He'd defied his orders, endangered his brothers, his men and his mission, all for a woman. But when he held Annie's sweet body in his arms, he could feel no regret. Though he sensed she was hiding something from him, it was too late to hold back his heart. In love and war, there are times when the only course of action is...Surrender.
Back in 2010 I had the extremely good fortune to discover Pamela Clare, an author whose gift for storytelling is amazing. In fact, in my opinion, she's unsurpassed in the historical romance genre. Surrender was my first Pamela Clare read, and I liked so much that before I was even finished I ordered the next in the series, Untamed. There are many thing to love about the MacKinnon's Rangers series, most especially the refreshingly unique setting for a historical romance. These “Highlanders” are living in the American Colonies, fighting for Britain against the French and the Native Americans. They belong to an elite military group called The Rangers, with Iain MacKinnon as their leader. He’s honorable, strong, independent, rebellious and not someone you can easily manipulate. He is an alpha male in every sense of the word and when he wants something, he always finds a way to get it, as Annie found out when he set his sights on her.

Annie is a spunky woman who demands propriety in all things – when it suits her. The last few years have been difficult for her. After her father and brothers’ deaths in battle she and her mother, out of necessity, go live with her uncle. He is an intense man who demands obedience in all things – especially the bedroom – where his sexual appetites run to the darker extremes. When Annie witnesses her mother’s death at the hands of her uncle, Annie runs away, only to be found, imprisoned and shipped to the colonies where she becomes an indentured servant. Circumstances arise that cause Annie’s and Iain’s paths to cross, quite literally. This is when the story really takes off.

In addition to Iain, we have Conner and Morgan MacKinnon, Iain’s brothers by blood, and Joseph, Iain’s Native American brother by choice. All of the males in this story are alpha and very worthy of their own stories.

While I truly did enjoy both Annie and Iain, what surprised me was how intriguing I found Lord William Wentworth, this story’s antagonist. He has blackmailed Iain and his brothers into serving the British crown in this war by threatening to have them hanged on false charges of murder. His actions, his motivations and his demeanor remind of another favorite “bad good-guy,” Jonas Wyatt from Lora Leigh’s Breeds series. As in Jonas’ case, I’m dying to read Lord William’s story! Some of the interactions between him and the brothers are laugh out loud funny and among my favorite moments from this book.

If you haven't yet read Pamela Clare's brilliant style of telling a story, you're missing out on some the best stories out there!