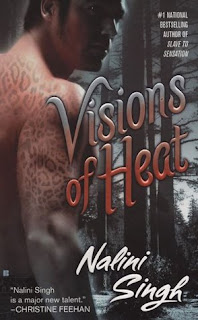 Used to cold silence, Faith NightStar is suddenly being tormented by dark visions of blood and murder. A bad sign for anyone, but worse for Faith, an F-Psy with the highly sought after ability to predict the future. Then the visions show her something even more dangerous - aching need...exquisite pleasure. But so powerful is her sight, so fragile the state of her mind, that the very emotions she yearns to embrace could be the end of her.

Changeling Vaughn D'Angelo can take the form of either man or jaguar, but it is his animal side that is overwhelmingly drawn to Faith. The jaguar's instinct is to claim this woman it finds so utterly fascinating and the man has no argument. But while Vaughn craves sensation and hungers to pleasure Faith in every way, desire is a danger that could snap the last threads of her sanity. And there are Psy who need Faith's sight for their own purposes. They must keep her silenced - and keep her from Vaughn.

This world that Nalini Singh has created is amazing. Absolutely enthralling! I love the way the stories unfold, the trials, the triumphs... it's a brilliant world, overall.

This particular story was a bit slow to start, and I had some problems getting into it. But once things started rolling, I was hooked and couldn't get through it fast enough.

I'm in the minority here, but I wasn't as impressed with Angela Dawe's narration this time. She does a great job with the Psy... their lack of emotion, the awe in their voices as they begin to see the world the way it really is... she's great with them, but I'm having problems with her portrayal of the Changelings.

I highly recommend this series to fans who like steam with their Sci-Fi and Urban Fantasy.


Purchase Visions of Heat at Amazon