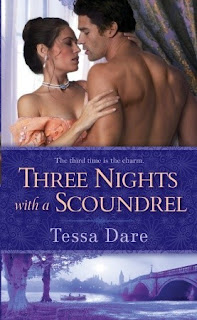 The bastard son of a nobleman, Julian Bellamy is now polished to perfection, enthralling the ton with wit and charm while clandestinely plotting to ruin the lords, ravish the ladies, and have the last laugh on a society that once spurned him. But after meeting Leo Chatwick, a decent man and founder of an elite gentlemen’s club, and Lily, Leo’s enchanting sister, Julian reconsiders his wild ways. And when Leo’s tragic murder demands that Julian hunt for justice, he vows to see the woman he secretly loves married to a man of her own class.

Lily, however, has a very different husband in mind. She’s loved Julian forever, adores the man beneath the rakish façade, and wants to savor the delicious attraction they share—as his wife. His insistence on marrying her off only reinforces her intent to prove that he is the only man for her. Obsessed with catching a killer, Julian sinks back to the gutters of his youth, forcing Lily to reach out with a sweet, reckless passion Julian can’t resist. Can her desire for a scoundrel save them both—or will dangerous secrets threaten more than their tender love?

Wow, Three Nights with a Scoundrel wraps up the Stud Club Trilogy and all I can say is, I never saw that coming! I’m not exactly sure how I can review this book without going on and on and on, and then give away too much of the plot and the truth about who killed Leo! I know others have managed to write wonderful reviews, but I’m at a loss. Please bear with me as I ramble my way through this review.

I’ve always loved Leo’s idea of the Stud Club, and figured he started it just to be magnanimous, to be a good person. I now know beyond a shadow of a doubt that Leo created this club for the very reasons he claimed he did – so that everyone could belong, not just those who are wealthy and accepted by society, but also for those who are not, and with the circumstances of his death being revealed, I admire him all the more for it.

I definitely adore Julian, which was something I wasn’t sure would happen. He came across as quite the unlikeable guy in the previous two books because of the way he put on airs, as he seemingly considered himself better than those around him. Well, now we understand why, and I’ve come to love him both for the man he is, and the man he is not.

I also loved Lily, her quiet nature, unobtrusive – yet so very smart, such an amazing lady. She was underestimated by everyone around her, even those who knew her best, thinking that her deafness meant she was somehow less able to manage things or to take care of herself. So this opportunity we had to get to know the real Lily was such a treat! In addition to her wisdom, she was so full of love, so giving and understanding that not only was she able to function on her own, she was able to look out for and take care of everyone around her. Even when they didn’t think they need her to.

I think the Stud Club and the mystery surrounding Leo’s death was an excellent foundation for this trilogy. We watch as his family and friends try to deal with this generous man’s tragic death, with some coping better than others. The truth is, sometimes there’s no way to understand, no resolution that can make us better able to accept the loss. Sometimes that’s just the way it happens. We can’t always gain an understanding of why fate steps in and changes a life's direction, or takes a life, but it happens and those left behind to grieve often times never give up searching for answers – answers they never find. Or get the answers they don’t quite expect. Such is the case with Leo’s death. Those dearest to him who so desperately needed the truth learned that the truth, that knowledge they gained doesn’t necessarily help because their pain still exists; their loved one is still gone. The real challenge they face is learning to go on, living their lives in a way that would have made Leo proud.

My only regret as this trilogy comes to an end, is that even though we did get to know him better in this book, we didn’t get to spend, in my opinion, enough time with Leo. He was a male most worthy of his own story and a happily ever after. With whomever he chose.

Click here to purchase Three Nights with a Scoundrel at Amazon