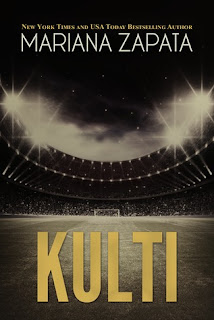 When the man you worshipped as a kid becomes your coach, it’s supposed to be the greatest thing in the world. Keywords: supposed to.

It didn’t take a week for twenty-seven-year-old Sal Casillas to wonder what she’d seen in the international soccer icon—why she’d ever had his posters on her wall, or ever envisioned marrying him and having super-playing soccer babies.

Sal had long ago gotten over the worst non-break-up in the history of imaginary relationships with a man that hadn’t known she’d existed. So she isn’t prepared for this version of Reiner Kulti who shows up to her team’s season: a quiet, reclusive, shadow of the explosive, passionate man he’d once been.

Nothing could have prepared her for the man she got to know.

Or the murderous urges he brought out in her.

“Every single thing that has ever happened in my life has led me here, Sal. Destiny is a ladder, a series of steps that takes you where you’re supposed to go. I am the man that I am, and I have done the things that I’ve done, to get me to you.”

Kulti is one of those difficult-to-review books, not because there’s anything wrong with it but because there is just so much “right” with it. There are so many things to gush about, so many things I want to share with you, but I won’t deprive you of the enjoyment that’ll come as the story slowly unfolds revealing painful secrets from the past, and the peace that can come when you share those secrets with the people who care about you most.

I’ve seen some reviewers say that this isn’t a romance novel, and I might agree with them, but only to a degree. The relationship - both emotional and sexual - between Reiner Kulti and Salomé Casillas is slow to grow, but it happens in such a mature, believable way that it’s one of the things I love most about the story. But make no mistake about it, there’s most definitely a romance here, and it’s beautiful - and hot!

I’ll wrap it by saying that if you’re like me and not a big fan of the New Adult genre because of all the drama inherent in its stories, give this one a try. There's drama, yes, but it's not contrived and fits perfectly with this sports themed romance.

Kulti is a stand-alone novel and so well done that you can bet I’ll be looking for more by Mariana Zapata!

Email ThisBlogThis!Share to TwitterShare to FacebookShare to Pinterest
Labels: can be read as a stand alone, contemporary sports romance, mariana zapata, soccer