Worth Any Price (Bow Street Runners #3) by Lisa Kleypas 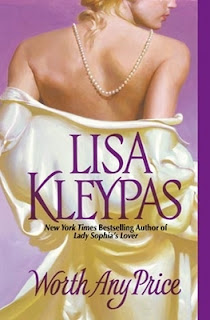 What is the price of love?

Nick Gentry is reputed to be the most skillful lover in all England. Known for solving delicate situations, he is hired to seek out Miss Charlotte Howard. He believes his mission will be easily accomplished --but that was before he met the lady in question.
For instead of a willful female, he discovers one in desperate circumstances, hiding from a man who would destroy her very soul. So Nick shockingly offers her a very different kind of proposition -- one he has never offered before.

He asks her to be his bride.

And he knows that this will be much more than a union in name only. For he senses what Charlotte does not yet know -- that her appetite for sensuality matches his own. But what Nick learns surprises him. For while London's most notorious lover might claim Charlotte's body, he quickly discovers it will take much more than passion to win her love.


Lisa Kleypas is one of those rare authors who seem to be able to take mere words on the page and bring them to life, giving us characters who become real to us. They are people we would want to live next door to, people we would choose as our friends and no matter their circumstance, they are honorable, noble people who will always do the right thing—eventually ;)

One of the things I love most about Kleypas’ novels is that her stories are written so that they can be read alone, yet are intertwined in such a way that they can be read as a series. You always have your main hero and heroine in the current book, but in each subsequent novel we have the joy of revisiting those people who we came to love and care about previously. We get to see how their lives have progressed, how their families have grown and how much finding true love has blessed them. In this novel, we revisit Sir Ross Cannon and his wife, Sophia as well as Sir Grant Morgan and his wife, Victoria. What a pleasure it is to see them still so much in love and to watch their affections displayed in subtle ways. In this book, there was one paragraph written so perfectly that in those few sentences we were given a candid glimpse into the depth of the love Sir Ross holds for Sophia:

[Sir Ross had just joined Sophia, Nick and Lottie as they sat visiting and drinking chocolate:]

Sir Ross laughed as he bent to kiss her cheek. It would have been an ordinary husbandly gesture, except for the way he finished the kiss with a soft, nearly imperceptible nuzzle.

It was such a small gesture, yet so intimate. It’s moments like these, found in all of Kleypas’ stories, which mean so much to me. I love “seeing” these exchanges rather than being “told” about them. And as I said, in just a few words, we see the depth of the affection Sir Ross and Sophia feel for each other—and this isn’t even their book!

In Worth Any Price, we are given a tale of redemption, of coming to grips with a harsh past, of learning to deal with that past and leaving it behind. Not an easy thing to do for a man who is used to keeping his thoughts and fears to himself, but he finds that painful burden much easier to bear when he finally shares it with Lottie, the only woman who had ever managed to work her way into his heart—and she did so without trying, she was just....herself.

I’m not going to ruin your read of the book by giving away too many details. I’ll only say that Worth Any Price is a story filled with love, hope, trust and the importance of family. It is the story of John Sydney and Nick Gentry—the boys they were and the man they became.

Click here to purchase Worth Any Price from Amazon