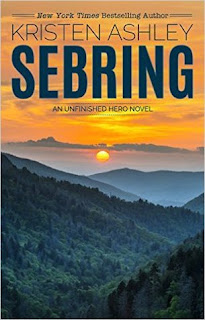 Nick Sebring has issues. Born feeling like an outsider in his own family, growing up under the shadow of a brother who could do anything, Nick isn’t that great of a guy. But when this culminates with Nick lashing out to hurt his brother through the woman he loves, Nick turns inward and makes some decisions about the man he intends to be.

And as he does this, he falls in love and truly learns the man that he’s grown to be.

When his love is murdered right before Nick’s eyes, Nick knows he has to avenge her. He knows how he’s going to avenge her. And he has no qualms using Olivia Shade to exact that vengeance.

Olivia Shade has grown up on the outside of her family too. Her problem is that they don’t want her outside. They want her all the way in, right under their thumbs. She pays the price for seeking escape and learns her lesson—she’ll never see a dawn where she wakes up free.

Then she meets Nick Sebring, and even as she fights it, the hope that died years ago starts to blossom. She can find love. She can have a man of her own. She can be happy. She can be free.

However, as Nick peels back the layers of all that is Olivia Shade, he finds something surprising. He understands its fragility. He falls in love with its beauty. He seeks to protect it.

But he forgets to protect his Livvie from one thing: Nick Sebring.

Nick Sebring is the Unfinished Hero I was most excited to read about, and also the most apprehensive to read about. Truth be told, he’s a man I wasn’t sure was worthy of redemption, let alone a happily ever after. Let’s face it - some of the stuff he pulled on his brother, Knight, and Knight’s woman, Anya… the fact Nick was still breathing by the end of Knight’s story was more than surprising. That said, this is a Kristen Ashley story so I put my full trust and faith in her and she pulled it off. As always!

SEBRING, the finale to the Unfinished Hero series is all kinds of feels. Despair, hope, anger, joy, passion… this one took me through an obstacle course of emotions. And I say ‘obstacle course’ because there were some feelings I wanted to avoid, some I wasn’t looking forward to tackling because I didn’t want to love Nick and Olivia as much as I ended up loving them. But even so, I wish there had been more to Nick’s story. For all that he did, all he endured, all he overcame… I wanted more of that amazing man.

Olivia’s side of things was interesting. The daughter of a drug dealer who helped “launder” the ill-gotten gains? How in the world I’d ever become invested in her, I did not know…but again, trust and faith in Kristen Ashley paid off there, too.

Just a note: the Unfinished Hero series is erotica, and Nick and Olivia’s relationship, from early on, is a sexual one. No, seriously… bunnies got nothing on them. Nick and Olivia were going at it hot and heavy from the start, and the romance didn’t come until later on. So invested was I in Nick, that I wish less time had been given to sex and more time spent getting to know him even better.

The bottom line… SEBRING brings the series to an end, and even though I’ll miss those Unfinished Heroes, I know we’ll be seeing more of them as Benito Valenzuela continues his reign of terror and meets the full wrath of CHAOS which will, no doubt, include the droll-worthy alpha men from Rock Chicks, Dream Man, and Unfinished Heroes.

An ARC was provided by the author for participation in the SEBRING Blog Tour and Giveaway.

The giveaway is over, but for an excerpt of the story, click here: SEBRING Blog Tour Book Excerpt

Posted by Blithely Bookish at 8:11 AM