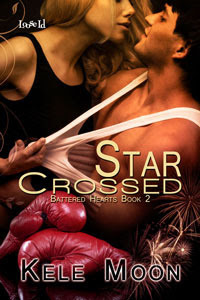 Heavyweight MMA fighter, Romeo Wellings comes from the hard streets of New York where his family ties to the mafia cause him nothing but pain. His life takes a surprising detour when he crosses paths with the twin sister of his long time enemy. After a steamy one-night stand, he faces the fight of his life, but it’s not in the cage. The secret relationship that blooms between Romeo and his real life Juliet has him battling his family and a dark past rather than let her go.

The only lawyer in her hometown of Garnet, Jules Conner is also a volunteer Sheriff’s deputy and co-owner of a successful MMA training center. Strong and dependable, Jules is always there for those who need her. Until one forbidden night in Las Vegas with Romeo leaves her feeling so alive she can’t stop reaching out to the sexy, bad boy of MMA, even knowing the forbidden love affair could jeopardize everything.

As the tide rises against them and the people they love work at keeping them apart, Romeo and Jules hold onto a dream for a better life together and vow to go down fighting rather than accept a tragic ending.

I'm so in love with the men of Garnet - and New York! The main characters are great and the supporting cast is just as great. Exciting, poignant, and burn up the pages sexy, Star Crossed is one hell of a read!

I can't wait to read Wyatt's story next!!

Posted by Blithely Bookish at 7:13 AM