Play it Safe by Kristen Ashley 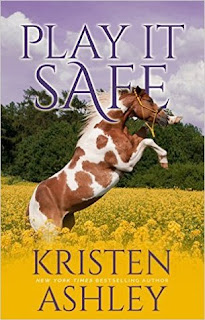 No connections. Play it safe. These were the rules Ivey lived her life by.

Until she hit Mustang, Colorado, a perfectly imperfect town where the citizens were welcoming and one of them included the tall, beautiful, macho man rancher cowboy, Grayson Cody.

And she wanted Grayson Cody.

So they fell in love.

But just as quickly as they fell together, they were betrayed and torn apart. Separated for years, Ivey was certain her life would not include her rancher cowboy. Until the town of Mustang reached out to her when Gray was in trouble. Even though she thought he broke her heart, she charged in to help. Then Gray and Ivey discovered they were betrayed and, not only that, Gray had an enemy who would stop at nothing to defeat him.


Okay, I love cowboys, and I love Kristen Ashley’s books, so a Kristen Ashley book with a cowboy hero?? Yeeeehaw!!!!!!!!!! Hell yeah, I loved it!

Play it Safe is heartwarming, heartbreaking, funny, exciting, burn up the pages hot and even though it’s about fifty thousand pages long… it was still too short. There’s a fantastic supporting cast of characters who need their own stories told, but most definitely, both Lash and Freddie. Those guys are all kinds of awesome!

I know I sound like a broken record, but I just can NOT get enough of Kristen Ashley’s writing because even though the writing isn’t perfect, the stories are! And I don’t know about you, but when I sit down with a book, looking for a chance to escape real life, I’m not looking to find it through perfect grammar and punctuation. I’m looking for that escape through characters and story lines that grab hold and don’t let go, and KA delivers. Every. Single. Time!

Click here to purchase Play It Safe at Amaon